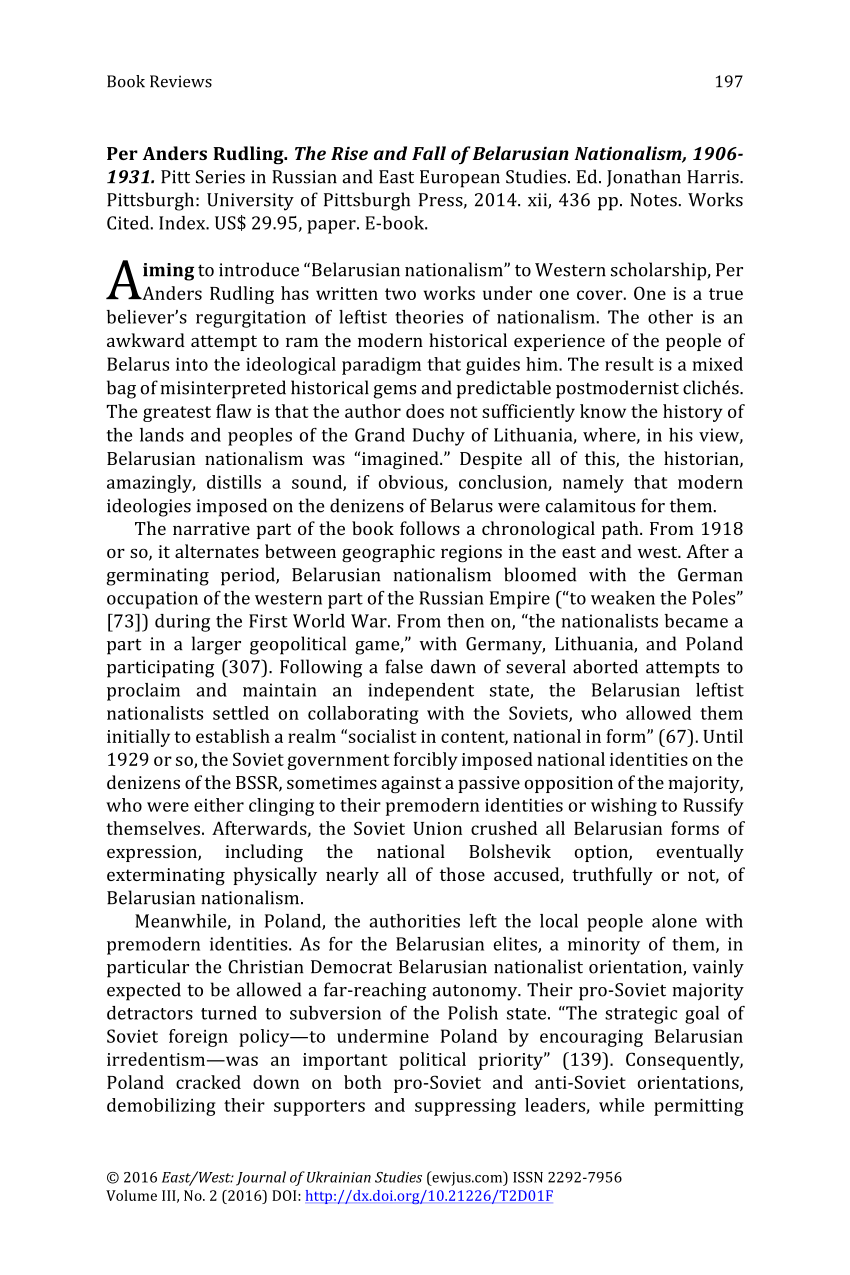 For the longest time the Belarusian people have used religion to identify themselves from occupying powers. The primary religion was the Greek Unite Church. With the main source of their identity taken away the development of a Belarusian national identity was halted on a large scale until Soviet rule in the twenties. This is the first formal example of a solely Belarusian institution, since that is pushing for Belarusian rights.

Meanwhile once annexed by the Polish side the Polish government began trying to assimilate the peasantry of Belarus. However Poland was in disarray, and the coalition of governments lacked resources to carry this out. The book in which this is referenced is supported by the collections of communist meetings in Belarus that are being translated as a primary source. Even though the Belarusians were being supported by the new Soviet state the Soviet Union did not want to recognize another new state, instead they utilized the fervent nationalism into fighting against Poland only to later annex it themselves. 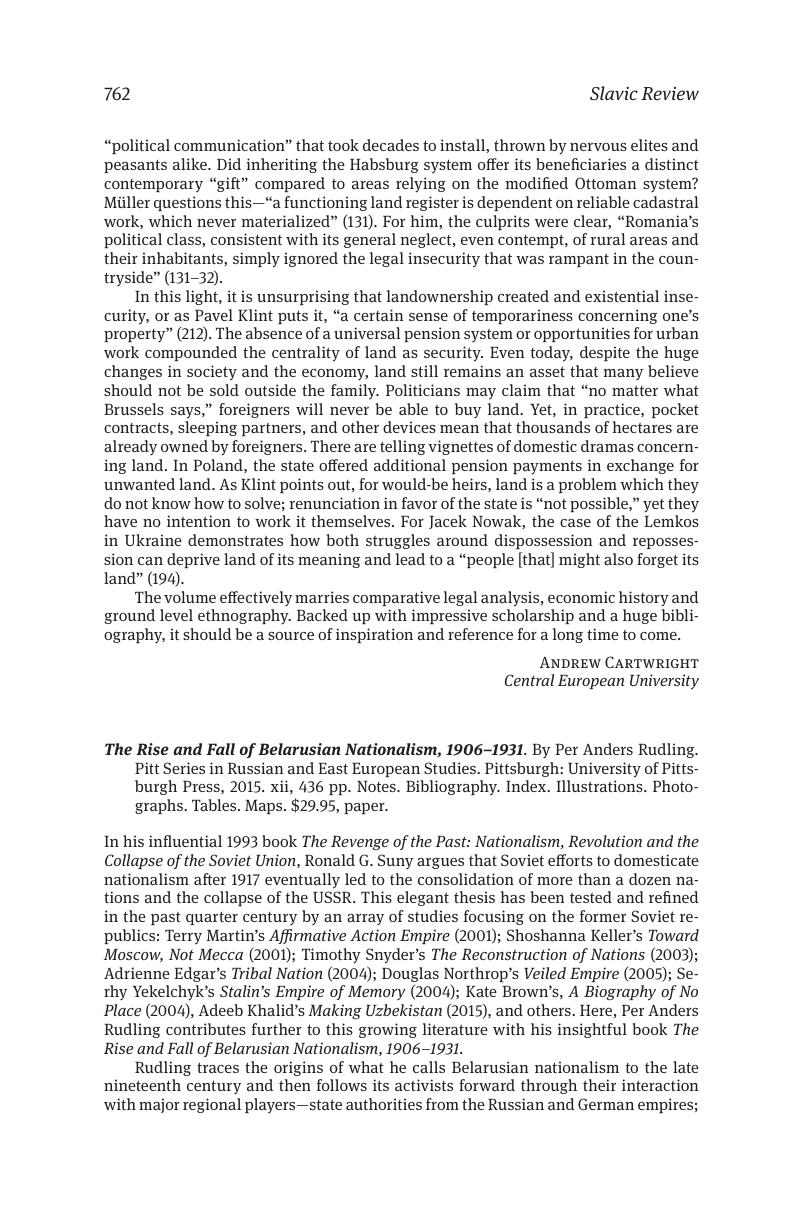 Another tactic used by Poland to suppress Belarusian nationalism is printed media. By making Belarusian literary works available in essentially only Polish, made it so that if the Belarusians wished to learn about themselves they had to do it through the lens of the Polish language and nation. This, however, was the complete opposite in the Belarusian Soviet Socialist Republic. Again this initiative of bolstering national language and pride by the Soviet Union taken up by the Soviet Union was to promote themselves as a big brother state that promotes and uplifts the diversity of the Belarusian people and celebrates their accomplishments.

Which is contrast to capitalist Poland that only wanted to assimilate and extort them. Of course later on the process of russification hit the Belarusian people as it did to all former soviet states.

During a congress was held in Belarus, during this congress the issue of education of the Belarusian people in Poland was discussed. This quote from one of the meetings in Soviet Belarus shows the discontent with the repression of their language and how they funded underground schools to preserve their heritage, but later on from the admittance of the congress to having a hand in these underground schools informed the Soviet Union and Poland, that Belarus held little political and diplomatic power when negotiating with them over matters of political sovereignty.

Before the death of Vladimir Lenin the general policy of the Soviet Union in regard to minority languages and was to allocate resources to, and uplift these once repressed languages and cultures. It was believed that nationalities could develop best on this basis, and that, with the rapid breaking down of artificial barriers of national isolation, not only could all circles of association be enlarged but cultures embodying diffusive national characters, and ideals of value to all nationalities, could flourish.

Therefore, the development of a singular national identity within Belarus was halted in the mid twentieth century under Stalin. Stalin thought there needed to be a single language of the Soviet Union.

Stalin — Marksizm i voprosy yazykoznaniya. Accessed December 5, Here Stalin is asserting that the use of many languages is a remnant of the old bourgeois system. This negatively affected the Belarusian development of national identity through an ethno-linguistic route and instead focused more on an ethno-cultural identity.

Belarusian is an endangered language in Belarus today, due to the legacy of this Stalinist idea of a unified Soviet state. It was the effects of this endeavor of the Soviet system to homogenize the linguistic and cultural atmosphere of Belarus that has ultimately led to the close ties between the nations of Russia and Belarus today.

One of the most crucial components of realizing a form of cultural or national identity is language. They used it as a divide and conquer method. Belarus was no exception to this; the soviet period of Belarus saw the greatest extent of growth in national pride and identity. As was said above it was not until the Soviet period that many people of the modern Belarusian territory even considered themselves Belarusian.

While the growth and government support of the Belarusian culture and identity was at its height during the soviet period, there was still large amounts of russification taking place, as was the case in most places in the Soviet Union. The linguistic trend that is seen above is not a recent one. And Ukraine was divided up between four states, primarily Soviet Union and Poland in , And that was a part of a larger European phenomenon that all of Europe in the s, particularly this part of Europe, became authoritarian, dominated by authoritarian right-wing movements.

The Ukrainians were no exception. So, as the political conditions became such that in the Soviet Union, Ukrainians were being killed en masse, dying due to famine, due to starvation under Stalin, and in Poland Ukrainian parties were discriminated, there was a current that took up an armed struggle against the Polish authorities.

They wanted to create an independent Ukraine, in fact a greater Ukraine encompassing all the ethnographic Ukrainian territories. And as Hitler and Stalin divided up Poland in , many Ukrainian nationalists from western Ukraine ended up under German control. But it was also an affiliation of—an ideological affiliation. The OUN wanted a one-party state under its leadership, an ethnically cleansed one-party state with no room for Jews and Poles and other minorities.

What Belarusian girls in Minsk think of foreign guys!

So to position the OUN historically, I guess this is still very much contested. But I do believe, and others do believe, other colleagues of mine do believe that also that the OUN can be classified as a fascist movement, sort of a generic Eastern European fascism. So you should make the distinction between Naziism and fascism. But if you talk about fascism as a larger generic phenomenon of radical right-wing movement seeking to overthrow society and have a rebirth of the society on a basis of new order, in that sense, OUN was created—in my assessment, a fascist movement.

The OUN later on, well, they tried to establish independent Ukrainian state, but the Germans, unlike in the case of the Slovaks and unlike in the case of the Croats, they were not prepared to recognize them as allies. In fact, the Ukrainians were treated as subhumans and treated extremely cruel by the Nazi government, and they would not be interested in cooperating with Germans and crack down on Ukrainian nationalism soon after the invasion. Here they also took part in the killing of Jews, but particularly in the ethnic cleansing of Poles in western Ukraine.

Poland, as you know, was pushed kilometers to the west by Joseph Stalin [incompr. So the Poles were removed by the UPA. But they continued also after the war. If the war in [incompr. So thank you so much for joining us. Thank you very much. The Real News Network, transcript of video interview, March 13, You were discussing the crushing of Ukrainian nationalism by the Soviets in about year , What exactly happened?

A very harsh insurgency continued for several years, roughly up until the early—, , when the Ukrainian insurgent army, led by the Bandera wing of the Organization of Ukrainian Nationalists, carried out an armed resistance against the collectivization, against the imposition of Soviet rule in this part of Ukraine. And the Soviets responded extremely brutally by deporting entire villages carrying out collective punishment. Roughly , people were being killed by the Soviets as they returned and imposed their draconian control of its territory.

And the UPA in turn used an escalation of violence also against civilians who collaborated with the Soviet authorities. But roughly at the time Stalin died in , the insurgency was crushed. And, of course, there was a liberalization of policy under Khrushchev after So Ukrainian nationalism, per se, was, well, pretty much stamped out in Ukraine.

In the West, however, you had several hundred thousand so-called displaced persons and refugees from Western Ukraine which stayed in the West after the war, and many of these have been in one way or another involved with the German authorities as they retreated westwards. And they, of course, many of them, many of those from Eastern Ukraine were forcibly repatriated. But those who had been Polish citizens before , they could stay in the West, and many of them emigrated to Canada and the United States, and there they built their communities. 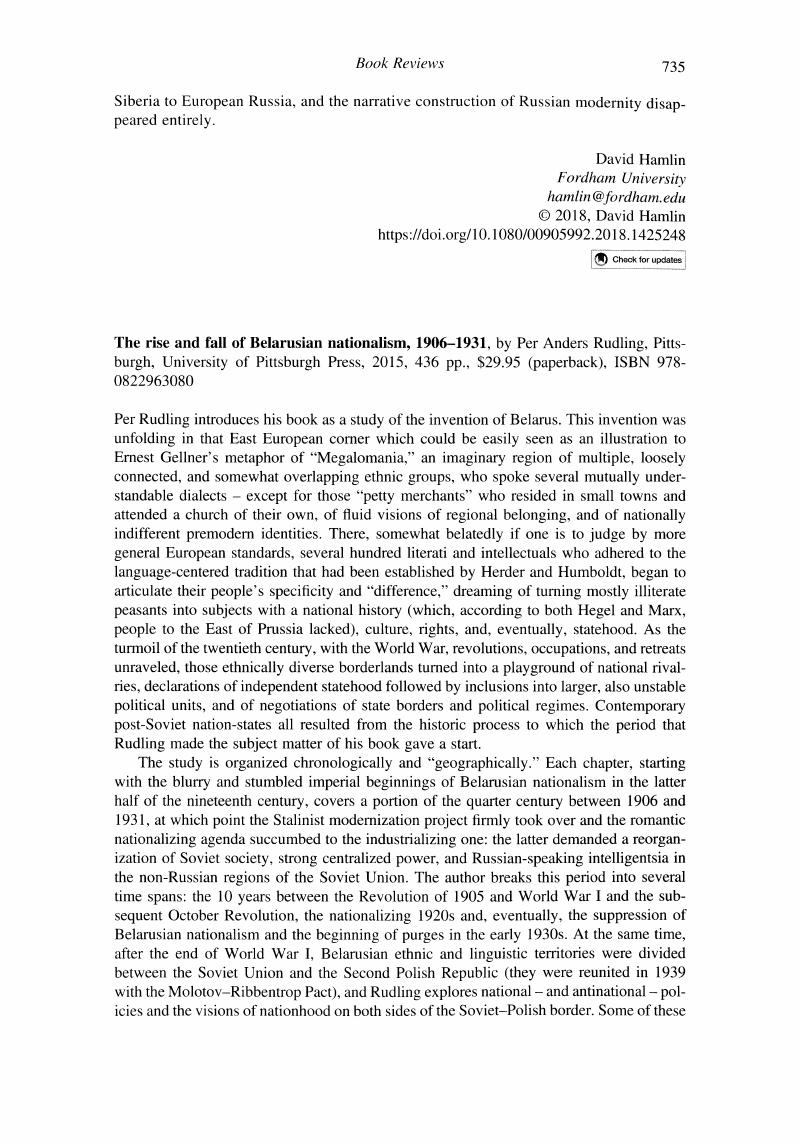 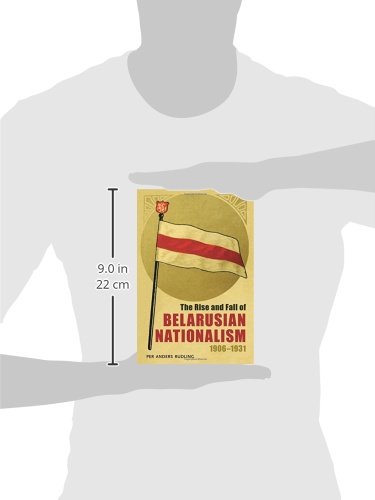 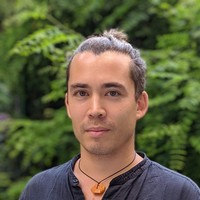